the Capone administration was in serious need of an HR dept.

as I enjoy discovering lil tidbits of Chicago’s history, I found this story interesting and while highly typical given the era, awfully frightening as well. clearly, there was no corporate mandate governing company policy and arbitrating employee disputes with “the man” like we have today. no pencil pushing office of “justice” to handle disagreements and grievances with airs of pompous elitism and snotty smirks all the while covering up their own company mishandlings… can you tell I worked in corporate america for half my life, literally.

so here’s the story:

❝Roaring Twenties comedian and radio star Joe E. Lewis could be considered the forerunner of such swill-and-spill comics as Dean Martin, Buddy Hackett and Shecky Greene. His stand-up routines, delivered with cocktail in hand, were spiked with such deadpan one-liners as “I don’t like to drink. It’s just something to do while I’m getting drunk.” But Lewis’s cornball humor was lost on “Machine Gun” Jack McGurn when Lewis informed his Green Mill employer (and Al Capone’s head hit man during the Prohibition era) that he was quitting the Mill for more coin at the New Rendezvous Cafe, a nightclub at Diversey and Broadway run by Capone’s bootlegging rival, George “Bugs” Moran. On the morning of November 9, 1927, Lewis was met at the door of his room (#332) at the Commonwealth Hotel (2757 Pine Grove Ave) by three of McGurn’s bruisers. After the requisite pistol-whipping, one of the thugs pulled a hunting knife and carved up Lewis from ear to ear, damaging his throat, tongue and vocal cords, and left him for dead. Amazingly, Lewis survived and, after reconstructive surgery and having to relearn the alphabet, he recovered enough to return to the Rendezvous stage just three months later – albeit with a raspy delivery and heavy security. The hit men didn’t fare so well: All three were found shot to death within months of the attack.❞ 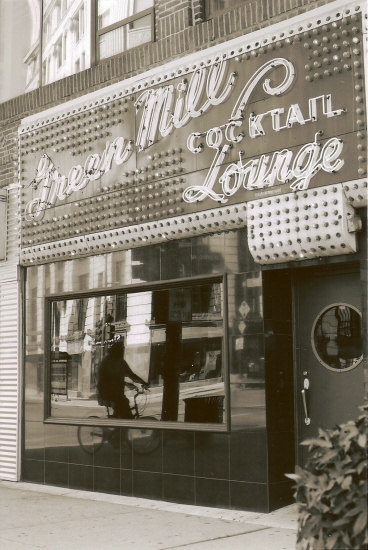 postcard of the Commonwealth Hotel – Joe E. Lewis was staying in room 332 at the time of his attack. (chuckmanchicagonostalgia.wordpress.com)

Lewis is pictured shortly after being released from the hospital. The scars, clearly evident, would remain for life. (tsutpen.blogspot.com)