Yesterday Bella had a seizure & my world stopped….

Bella at 9 weeks old, the week after we brought her home.

The day was going well, I stepped into the kitchen to make some lunch while Bella relaxed on the rug as she often does in the afternoon. It took only a few minutes to whip up a kale salad & an omelette but when I returned to the living room – she was suddenly shaking.

It was almost undetectable at first, a slight steady back & forth of her head but those big brown eyes staring up at me told me she knew this wasn’t normal. I said her name & rubbed her back. The shaking intensified and her entire body felt like it was stiffening. She raised her paw as if to reach out to me, but it stayed there, stuck mid-air then more shaking. I started to panic. 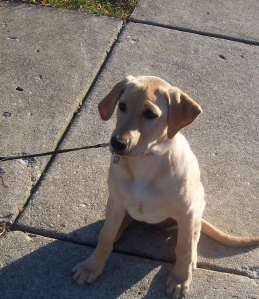 Not knowing what to do or what was happening, I called her name a few times – or kinda yelled it – this was scaring the hell out of me! Clearly there was nothing she could do to help me help her. I immediately thought ‘take her to the animal hospital‘ but I couldn’t so I called her dad at work. He picked up as I was mid-sentence pleading with Bella to please be okay which naturally made him anxious wondering what the hell was going on. I tried to calmly explain to him what was happening –  I thought she was having a stroke as it sure looked that way. Something was definitely wrong & admittedly, I’m not the best in crisis situations so to say my emotions were running high was an understatement. No question. He was on the way home & fortunately, only working about 20 minutes away.

3mths old – my favorite picture of her.

What happened in the next 10 minutes only made things worse, somewhat confirming my thinking. Quickly I ran upstairs to toss on some shoes & when I returned, her paw was back on the floor & she was struggling to stand up, her hind legs were so weak beneath her. Being outdoors lightens her every mood so I asked if she had to potty, hoping this was some really odd case of digestive trouble while trying to seem normal (I was NOT successful). She stumbled to the door in a squat position but once outside she seemed confused and definitely not her normal self fueled by sunshine & the energetic sound of the neighborhood kids. Fortunately, no kids were home from school yet so none of them saw her in such a scary state but my heart was sinking.

Her favorite nap spot as a puppy – covered in her pink cloud blanket & laying on mommy’s Hello Kitty slippers.

A neighbor was outside with a plumber hired to fix a water leak at his house. The plumber approached me to ask about my water meter but paused mid-sentence when he noticed Bella’s condition & asked if she was okay. I said no & that I thought she had just had a stroke as I was easing her back inside the house. I heard him apologize & noticed the shocked look on my neighbor’s face as I quickly closed the screen door to tend back to Bella.

playing at Pet Smart as a puppy – she thinks everyone’s a friend, they got along fine.

She unsteadily managed a few steps inside making it to the powder room floor & just as I slowly approached & called her name, she fell to her side, hard – all of her weight crashing into the floor. I screamed!

I pleaded with her to lay down but she kept trying to get up & each time she fell down again & again. She looked terrified. It felt like a nightmare I just wanted to wake up from, I felt helpless! My neighbor rushed over after hearing my screams & immediately asked what should he do?! I asked if he could take us to the animal hospital. He quickly agreed & said he would pull his car as close to the door as possible.

reluctantly posing for the camera

I called her father back to let him know the plan. By this time, Bella had given up trying to stand & was on the floor where she last fell, stuck. As I hurriedly answered his questions, I could tell he was trying not to panic, but being far away & hearing this sudden madness going on at home, I could only imagine how badly he felt. My neighbor returned & was on the floor checking Bella out, guiding her eyes with his fingers & checking her limbs for injury.

After a few minutes, she was quiet & her tail was wagging again. She loves Kyle, his wife & their adorable three-year old daughter. My baby Bella – the neighborhood social butterfly & lover of people, especially kids, still showing her hospitality despite being wounded. 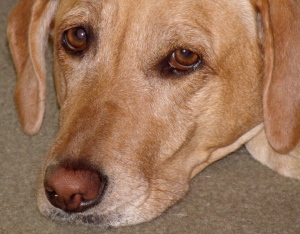 my boo-boo bear…. oh that face!

So there we sat, on my hallway floor, Kyle, Bella & me. He was calmly stroking her coat as he shared how his dog once had a seizure due to ingesting cigarettes butts. He understood my panic & agreed that when you see it for the first time, its terrifying because you don’t know what’s happening. Since her father was now getting closer to home, we decided to wait for him considering she was calmer now & didn’t seem to be in any pain with the sweet wagging of her tail.

her favorite place in the world, next to her papa

We heard the garage door go up – one of her major triggers of excitement because she knows her papa’s home. As expected, she barked her anxiousness and attempted to get up but we both insisted she stay still & she did. Once he walked in, her tail was wagging even more & she raised up anxious to see him as if the last the 10 minutes never happened. Amazing! 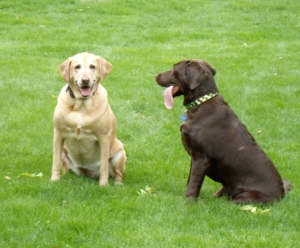 Having called the vet on his way home, she was expecting us so off we went. Bella was fine on the ride there & excited as we pulled up. The animal hospital is familiar territory that she’s known from her first check-up since she was a puppy of 8 weeks. Our wonderful vet checked her stats – all normal & then took a few blood samples.

We’ll get the results tomorrow but she educated us on what, according to her professional opinion, sounds like a seizure. Bella is a yellow lab & per the doc, her breed is the 3rd highest for seizure conditions. Scary. At four years old, she’s never had one before & while we were aware of other hereditary conditions associated with labs such as joint issues and arthritis, we were not aware of seizures as a known condition. It could be nothing or it could be something. She might never have another or she could have several. 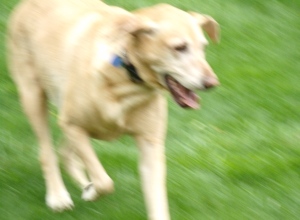 the most fun ever! her favorite way to spend her time.

Doc said some of her pet-clients are the best predictors of thunderstorms because they always have a seizure before one comes along. She educated us on what to do should this happen again. As suspected, my panic-stricken screams didn’t help Bella any but first-timers are allowed all the emotions of an unknown frightening situation such as this. Kyle was able to calm her better than I could (hence the tail wagging at his arrival) considering pets tend to absorb our emotional state so my stressing didn’t help her any. Sorry, Bellz. 😦

refusing to pose while wearing her rain gear. such a moody one, that Bella

Doc said some parents are able to soothe their dogs out of having a seizure (when they spot the signs) just by turning off anything stimulating, dimming the lights & speaking softly while rubbing them.

I’ll have to remember that next time. But here’s hoping there won’t be a next time.

Bella – relaxing in her bed & no doubt recalling yesterday’s “adventure”.

here’s the kicker to all that happened yesterday…. hours before her seizure – I watched this clip on YouTube. It brought tears to my eyes. After I watched it, I sat beside Bella, rubbed her belly & said a lil prayer that she’ll be with us for a long time to come… strange how things happen. I had no idea what would occur just hours later but I’m so extremely thankful she’s still here.

11 comments on “Yesterday Bella had a seizure & my world stopped….”