Hope everyone had a sweet Valentine’s Day, mine was lovely & simple, just the way we like it. Cards & balloons from the beau. My mom sent the sweetest care package filled with goodies for all of us, including Bella, who continuously circled the bag anxious for her treat…. sp-oi-led…

Seeing how yesterday was love overload, I thought I’d switch gears and make today’s Fun Friday about the 7 Best Moments of the 2013 Grammy’s….but who am I kidding? Even I couldn’t come up with seven best moments from this year’s Grammy Awards. I tapped out at three, so um yea, how bout we close out the week with 7 Great Love Stories instead, on film that is….

Now, everyone has their favorites and it was tough narrowing it down to only seven, so I came up with some criteria for this list:

Here are my TOP SEVEN love stories, please feel free to share your own in the comments….

I surprised myself placing this at #7, because it is THE urban love story of my generation. Plus, it stars my all-time childhood crush, Larenz Tate, and filmed in my beloved city. What’s not to love? Love Jones tells the story of Darius Lovehall, a Chicago poet who starts dating Nina Moseley, a photographer. He pursues her, she starts to fall for him and they casually date while trying to figure out if they have something beyond “just kickin it”. But just as things are going really well, Nina decides to test Darius’ feelings for her setting off a string of complicated events that ultimately separate them, but of course they return to each other. Released when the beau & I started dating, it has an amazing soundtrack despite the film’s overall dark imagery. 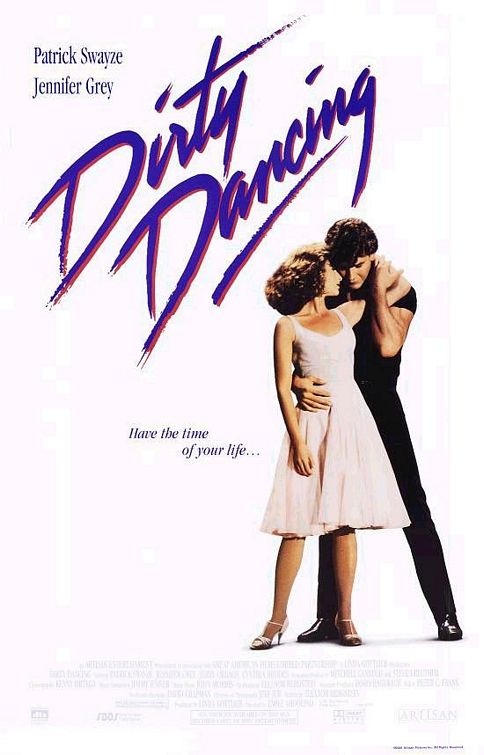 Is a description really necessary? This film is a classic for every generation. I’ve watched it so many times and still remember seeing it for the first time as a kid. Who didn’t fall in love with Johnny Castle! And Jennifer Grey’s quirky awkwardness and snort-driven laughter made us all nervous for her big performance. Nobody puts Baby in a corner…how many times have you quoted that line? Same here. Dirty Dancing tells the story of Frances “Baby” Houseman who spends the summer in a holiday camp with her family, only to fall in love with the camp’s dance instructor, disobey her parents and learns how to dance in the naughtiest of ways….

Fun Fact: It was the first film to sell more than a million copies on home video. 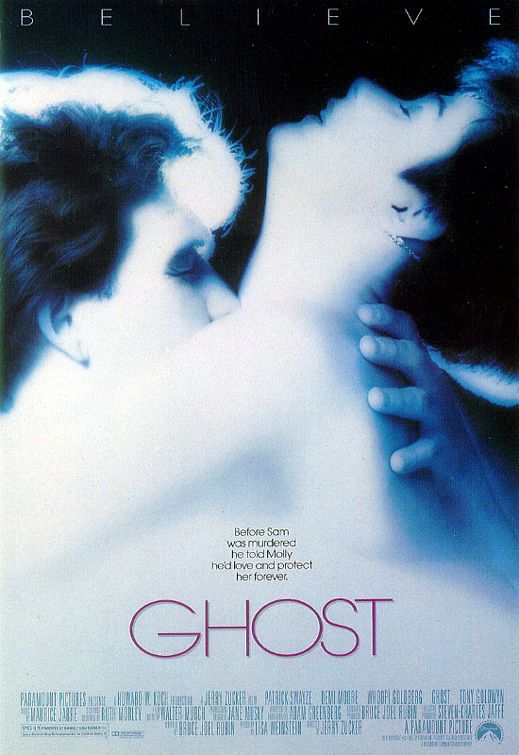 Another P. Swayze film, was he not major in the 90s or what? Just seemed like the kind of guy you’d want to know. Such a tragic and sad love story, not a dry eye in the house when it debuted. After being killed in a botched mugging, Sam Wheat remains on earth as a ghost, determined to save his wife from danger. With the reluctant help of a cranky local con artist turned medium played by Whoopi Goldberg, he is able to finally reconnect with his wife and depart to the afterlife in peace. This movie introduced The Righteous Brothers to a whole new generation. Whenever I hear Unchained Melody, I instinctively picture the infamous pottery scene, which by the way, resulted in waiting lists for classes all across America. And who can forget the first time we witnessed Demi Moore’s ethereal ability to cry while remaining beautifully composed, no ugly crying in her gene pool, goodness…

Fun fact: An outstanding commercial success, grossing over $505 million at box office on a $21 million budget, it was the highest grossing film of 1990.

Sam: Molly, you’re in danger.
Oda Mae Brown: You can’t just blurt it out like that! And quit moving around, because you’re starting to make me dizzy. I’ll just tell her in my own way.
[pause; then]
Oda Mae Brown: Molly, you in danger, girl.

This movie… THIS MOVIE…. a simple synopsis doesn’t do it justice, but in a nutshell it’s the story of a young man who must complete his work at a Navy Flight school to become an aviator and learns some tough lessons from his even tougher gunnery sergeant along the way. Oh and he also falls for a local girl. But it’s so much more than that, Richard Gere plays Zachary “Zack” Mayo who signs up to become a Navy pilot hoping to escape a turbulent life with his drunken father after his mother commits suicide. He encounters Marine Gunnery Sergeant Emil Foley (the fabulous Louis Gossett, Jr) who makes it clear the program is designed to eliminate the weak and tests/pushes the candidates to their very limits. Foley further warns the male candidates about the young women in the area, claiming they scout officers seeking husbands and won’t hesitate to use pregnancy to trap them. Zack befriends his fellow candidate Sid Worley, and the two meet two local girls..enter Debra Winger’s raspy-voiced earnest sassiness as Paula, and the rest as they say is classic love story history!

Fun Facts: Originally, John Denver was cast to play Zack Mayo after a string of other actors went up for the part, including Jeff Bridges, and Christopher Reeve. Debra Winger’s part was initially given to Sigourney Weaver, then Angelica Houston and finally Jennifer Jason Leigh, who quit the project opting to do Fast Times at Ridgemont High instead. Unknown actresses (at the time) Rebecca De Mornay, Meg Ryan and Geena Davis also auditioned.

Paula: You know something, you ain’t nothing special. You got no manners, you treat woman like whores and if you ask me you got no chance of being no officer.

Who can forget the highlights of this romantic and touching story, filled to the brim with an exceptional cast, right down to the adorably funny little boy. Tom Cruise is stellar in the lead role, as a sports agent with a dying relationship and sudden moral epiphany that results in his creating a workplace manifesto, for which he pays a steep price. Leaving with only his dignity and a new assistant, the only person touched by his honesty and integrity in an otherwise slimy business. His new-found philosophy is tested as he manages to nab the only athlete who decides to give him a shot, as long as he can show him the money. Well-written, well-cast (Cuba Gooding Jr., Regina King, Renee Zellweger, Bonnie Hunt and Jay Mohr ride cinematic shotgun), and riddled with lines that would become forever emblazoned in our psyches. You know it had you at hello.

Yes, there are spanish subtitles, but it was the only clip I could find of this hilariously memorable scene.

I have no idea how many times I’ve watched this movie, but it’s always hard to turn the channel from this unusual love story that stole all our hearts. An uptight suit meets a street-smart prostitute and their encounter takes an unexpected turn down troubled-love meets fairytale lane. Richard Gere is just one of those actors whose eyes are so pivotal to his performance – a smirk, a blink, a glance across the room, all intricate yet equal parts of his character and charm. And Julia Roberts was just starting her journey down celebrity mega-stardom when she flipped those luscious red locks and flashed a mega-watt smile that easily transferred her performance into box-office gold! Edward Lewis and Vivian Ward were the oddest pairing but their love affair turned out to be the real thing, against everyone else’s expectations, and anyone who doubted them…big mistake, HUGE! 🙂

UNBELIEVABLE Fun Facts: Christopher Reeve was considered for the role of Edward Lewis, after Al Pacino turned it down, although he read with Julia for the part. For whatever reason, the studio really didn’t want Julia for the role of Vivian, originally envisioning Karen Allen for the part but she declined. Offers were also made to Molly Ringwald, Michelle Pfeiffer, Daryl Hannah and Jennifer Jason Leigh, who all declined on the basis of feeling uncomfortable with the content. Winona Ryder & Jennifer Connelly auditioned but were denied the part because they looked too young for the role. Meg Ryan was a top choice of the director but she passed on the role too, and Mary Steenburgen was their first choice but it’s not known what happened with that offer. Valeria Golina (remember her), also turned it down afraid of how her thick Italian accent would work for the part. So finally, after all these actresses dismissed the role, 21-year old Julia Roberts was reluctantly awarded the part that would make her a SUPAstar.

Vivian: Can I call you Eddie?
Edward Lewis: Not if you expect me to answer.

The Notebook is my favorite love story of all time. The end still makes me sad, even though I know what’s going to happen. This is when Ryan Gosling first caught my eye, way before everyone lusted after him in Crazy, Stupid, Love. And Rachel McAdams is amazing as Allie, the ultimate ‘girl next door’ but with more oomph. Set in the 40s, charming and persistent Noah sets eyes on, and doesn’t hesitate to pursue the feisty, outspoken Allie when her family spends a summer vacation in a neighboring town. But the pair is ultimately forced apart due to strong parental disapproval. Years pass, lives move on, and new loves found. But after keeping his word to rebuild a dream home he’d been eyeing since childhood, Noah becomes the subject of a newspaper article. An article unexpectedly seen by Allie, and at her wedding gown fitting of all places. The shock causes Allie to faint, her mother to panic and a journey ensues to see if any of it is real – the house, Noah, their lost love. It is. They do. And they build a wonderful life until the end, which comes far too soon for either of them. It’s a true display of loving someone in sickness and in health, come what may, even if they don’t know who you are anymore. Together in love till the very end.

Fun Facts: The director wanted someone unknown and unattractive for the part of Noah, which is why he chose Ryan Gosling. This news later took Gosling by surprise. How wrong was that guy!

Noah: I am nothing special; just a common man with common thoughts, and I’ve led a common life. There are no monuments dedicated to me and my name will soon be forgotten. But in one respect I have succeeded as gloriously as anyone who’s ever lived: I’ve loved another with all my heart and soul; and to me, this has always been enough.

For all you Gosling fans, you’ll enjoy this little clip from The Mickey Mouse Club… how many darling little famous faces do you recognize… 🙂

Well, that’s it for me… have a great weekend everyone! Just heard about the meteor hitting Russia this morning as I was typing this post, sending prayers. Another terrifying event, completely out of our control.

This entry was posted on February 15, 2013 by suite7beautytalk in FUN FRIDAYS and tagged Films, Love Stories, Movies, valentines day.