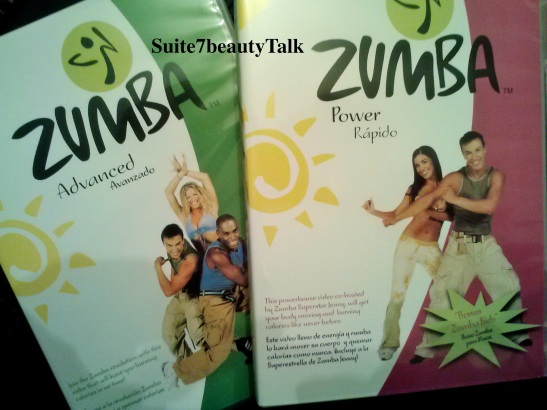 Oh boy, where do I start?

My cardio this week has consisted of two Zumba workouts – Rapido & Advanced. While I’m glad I finally got to see what all the hype is about, I’m not a huge fan of either workout. For a girl who likes structure and clarification, it fails to satisfy either of those needs and yet…

Zumba Rapido seems more like a rehearsal for the video but was somehow released as the real thing. There’s no real instruction as they move rapidly from one move to the next, and unless you’re well-versed in Latin dancing (I’m not), be prepared to spend a lot of time watching & trying to fall in line. I’m sure I would’ve burned more calories had they instructed better & watching the Beginner’s DVD is fine, but it’s natural to forget when you actually start the workouts. At one point, both instructors are trying to figure out if the music playing is Salsa or something else, as they fumble through the steps. The silly laughter among them is more of a distraction than a light-hearted part of the routine, the screw-ups as they go along & the random fast-paced dance breaks between couples make this workout seem more like outtake footage than the calorie burning fun cardio session it’s meant to be.

This workout could be great if it {again} had better instruction. Clear details & maybe a quick demo of each move as opposed to jumping from one move to the next as if everyone at home attended several rehearsals with the cast & knows the routine. The lead instructor speaks only in Spanish & his assistant instructor isn’t great on clear details, so I spent quite a bit of time standing and watching many moves before I could join in + they were moving so quickly they were on to the next by the time I got it down. It was a tad frustrating. I prefer workouts that allow you to get the move & know the reps from the first try – like P90X.

Anyone tried Zumba? What’d you think?

This entry was posted on April 12, 2013 by suite7beautytalk in Uncategorized and tagged Cardio, fitness, Zumba Advanced, Zumba Rapido.